Ligaments, tendons, and muscles play an important role in the function of the hip. Ligaments are soft tissue structures that connect bones to bones. A joint capsule is a watertight sac that surrounds a joint. In the hip, the joint capsule is formed by a group of three strong ligaments that connect the femoral head to the acetabulum. These ligaments are the main source of stability for the hip. They help hold the hip in place.

A long tendon band runs alongside the femur from the hip to the knee. This is the iliotibial band. It gives a connecting point for several hip muscles. A tight iliotibial band can cause hip and knee problems, illustrating the interdependence of the ligaments, tendons, and muscles in the hip joint. 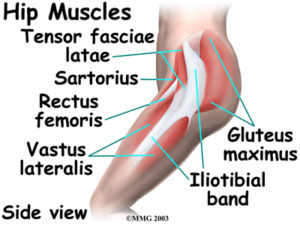 The hip is surrounded by thick muscles. The gluteals make up the muscles of the buttocks on the back of the hip. The inner thigh is formed by the adductor muscles. The main action of the adductors is to pull the leg inward toward the other leg. The muscles that flex the hip are in front of the hip joint. These include the iliopsoas muscle. This deep muscle begins in the low back and pelvis and connects on the inside edge of the upper femur. Another large hip flexor is the rectus femoris. The rectus femoris is one of the quadriceps muscles, the largest group of muscles on the front of the thigh. Smaller muscles going from the pelvis to the hip help to stabilize and rotate the hip.

The interaction of the ligaments, tendons, and muscles in the hip joint plays a vital role in your ability to walk, run, move, and exercise.

2 thoughts on “Ligaments, tendons, and muscles”