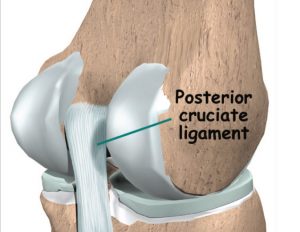 The PCL is the primary stabilizer of the knee and the main controller of how far backward the tibia moves under the femur.

The most common way for the PCL alone to be injured is from a direct blow to the front of the knee while the knee is bent. Posterior cruciate ligament injuries often occur during an auto accident or when someone falls on a bent knee.

The pain and moderate swelling from posterior cruciate ligament injuries will usually be gone after two to four weeks, but the knee may still feel unstable. The symptom of instability and
the inability to trust the knee for support are what requires treatment. Also important in the decision about treatment is the growing realization by orthopedic surgeons that long-term instability leads to early arthritis of the knee.

PCL injuries are diagnosed primarily through history and physical examination. X-rays may be ordered to rule out a knee fracture, but tendon and ligament damage does not show up on X-rays. So, an MRI may be ordered. An arthroscopy may be needed to make a definitive diagnosis.

Initial treatment for a PCL injury focuses on decreasing pain and swelling in the knee. Rest and mild pain medications, such as acetaminophen, can help decrease these symptoms. Less severe PCL tears are usually treated with a progressive rehabilitation program. Most patients receive physical therapy treatments after a PCL injury. Therapists treat swelling and pain with the use of ice, electrical stimulation, and rest periods with your leg supported in elevation.